skip to main | skip to sidebar

Goodbye to the Weekend Assignment (Unless....)

I guess it's time. 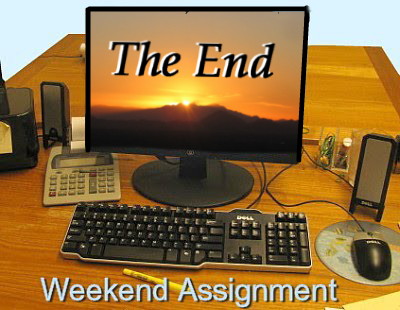 I have been participating in the Weekend Assignment since the summer of 2004, just a few months after John Scalzi founded the meme as part of his AOL Journals gig. Within a few weeks it became an obsession with me. Since then I have written an entry in every single Weekend Assignment, whether the topic was assigned by Scalzi or, in more recent years, by my friend Carly or myself, or by someone else. A number of you have suggested topics as "guest professors," and for this I am grateful, even if I didn't use them all.

But the meme has been in decline for years, with most topics garnering from one to three entries, mine included. Coming up with fresh ideas for it, and second-guessing which ones are most likely to inspire participation, is a process that ceased to be fun for me over the last year or so. At the same time, my own life has changed dramatically in the last few months, as I've gone from working 4 to 7 hours a week to working full-time and then some. All in all, the prospect of writing the next Weekend Assignment question has become a chore instead of a game.

So I'm giving it up.

If anyone wants to take over this venerable meme, I will be glad to pass the torch, and help you keep it alight with announcements and promotions during the transition. I'll even do the assignments, but only as a participant.

Frankly, I suspect nobody will take me up on this offer, and the Weekend Assignment will quietly die. And that's okay. It's had a good, long run, encouraged people to write, and introduced bloggers to each other. Even if there is never another Weekend Assignment topic, the meme is far from a failure overall. Its time has just passed -- or, at least, my time as its champion has passed.

I will still be hosting the Round Robin Photo Challenges on another blog, and participating in Carly's Ellipsis Monday Photo Shoot. And I'm not giving up text-based blogging entirely. When I feel a rant coming on or have some news, you can expect to find me filling up a screen over at Outpost Mâvarin.

Meanwhile, here are the results of Weekend Assignment #366: You're Doing It Wrong. Because of Easter and Passover, I gave people an extra week to do this one, but it didn't help:

In a recycled entry from a previous Assignment, Anne said...


When I was 24 years old, I put together my first “entertainment system”. A stereo receiver hooked up to a TV, VCR, CD player and speakers. I don’t think I even had a DVD player yet, and I certainly did not have cable. I put it all together myself and it all worked. That weekend, my brother, then age 20, came over. I dragged him to the room to brag. Not about the stuff, mind you. But the fact that I did my homework, made good consumer decisions, and put it all together by myself. He took one look and said, “This is all wrong,” and started pulling out cables.


After 45 minutes or longer, we finally decided that one of us would continue to wait where we were while the other checked out the other apparently deserted parking lots at the same intersection. If I recall correctly, that was how we found Bob, and boy, was he mad! We had all been right where we had said we'd be, but missed each other in the dark, simply because it didn't occur to Bob that we might be shivering in the cold in the grocery store parking lot on the northeast corner of the intersection, not warm and safe in the bar on the southwest corner.

Thanks to everyone who has ever written up a Weekend Assignment entry, or taken the time to read the entries of others. See you around!

Karen
Posted by Karen Funk Blocher at 12:00 AM

Welcome! We're glad to hear from you. If you are leaving a link to your blog, please write out the whole URL, not just a live link. Thanks!

Karen Funk Blocher
Author of magazine articles, trading cards, and the Mâvarin novels. Intermittently seeking an agent and a publisher. Accountant, church webmaster, ex-fanzine editor. Married since 1979, one husband, no kids, two dogs, no cats. Email is mavarin2 at gmail.com. Home is Casa Blocher, better known as The Museum of the Weird. Welcome!

Past Assignments in this Blog